Exoprise recently added flexible team and Role Based Access Control (RBAC) support to the CloudReady platform. As customers have expanded usage, there’s been a need for more control and delegation within the product. The engineers at Exoprise took a step back, investigated various implementations and put together a framework that should scale for years. Additionally, we migrated the platform — in place — with no downtime or interruption to our customers’ experience.

When we set out to add more control within our product, we didn’t want to reinvent the wheel. The engineers also didn’t want to over-complicate as we’ve all seen projects spiral out of control trying to add lots of access control features.

One existing popular SaaS product that inspired us was Github.  We don’t use Github for our hosted source-control but the service had similarities we thought were relevant:

Exoprise engineers concluded that the concepts were similar enough and that we could leverage some of the terminology and modality from the Github examples. Thus, our Team and Organization implementation was born.

Originally, Exoprise had every person for themselves within our database and you could share out access to individual sensors on a person-to-person basis. It wasn’t scalable and our customers needed more. Re-organizing would have to be done carefully. Internally, we had to convert every account to an “Organization” and then carefully merge them together, sometimes manually ourselves. For some accounts, we gave customers the ability to import their own legacy “shares” to Organization members.

Organizations are now the root level within CloudReady. Every person that signs up is put in their own organization to start and additional users can be added to an organization. When organizations convert to payed accounts (as opposed to free trials) additional features can be unlocked. In the back-end, we have the capability to merge organizations together if two people within the same real organization happen to start consecutive or concurrent trials (a no-no according to our MSA).

Users can have organization-wide roles and team-wide roles.  The difference between organization and team roles is what resources; sites, sensors, alarms, etc. are included in the team.  This gives customers flexibility in organizing access while not being overly complex.

Access levels are controlled by the following roles,  starting with the most privilege:

All access levels are data-driven, defined by discrete bits within the system and new roles can be added in the future.

It takes a village to monitor the cloud and guarantee SLAs for your organization. Give CloudReady a try and see how easy it is to monitor your cloud applications like Office 365, Box, Salesforce and more.

Teams enable Organizations more fine-grained control to CloudReady Sites, Sensors and other resources within the CloudReady product. To leverage teams:

A couple of other important points about inheritance and teams: 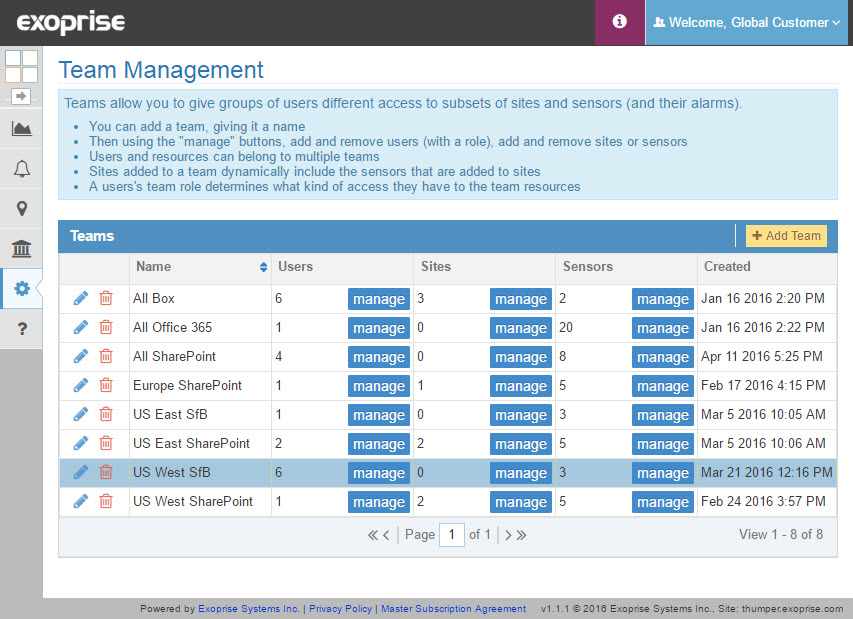 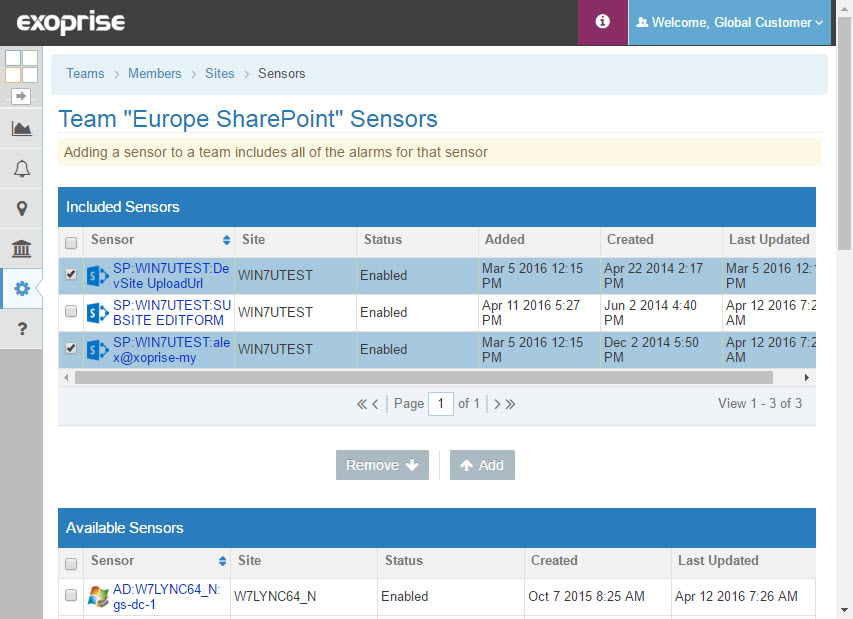 Add specific sensors to a team or add sites with roles that control access.

We’ve mentioned resources, sites and sensors in regards to team access control a number of times. Currently, those are the primary resources that are added to teams. We will expand this to include alarms, integration’s and other types of sensors and monitoring in the future.

Speaking of the future, we have more plans in the works for our Organization and Teams functionality. We will soon be integrating Active Directory Federation Services into our Organizations and Teams. Additionally, we are building support for more expressive resource inclusion in teams. For example, we are adding support for dynamically including all sensors of certain types (e.g. SharePoint, Exchange Online, etc.) to teams. These are features that our customers are asking for as they expand their deployments of CloudReady.

If you have any questions about how this works or whether its suitable for your organization, send us a note: success@exoprise.com